In December 2020, an APK teardown revealed that Google was preparing to add a Recycle bin function to its file management application, Files by Google. It is now deployed to some users with version 1.0.378055542 of the application on Android.

As the name suggests, the new Recycle Bin feature will allow you to temporarily delete files from your device using the Files by Google app. You can restore these files for up to 30 days from the Trash folder, after which they are permanently deleted. Of course, you can also manually open the folder and delete the files in it at any time if you never want to get them back.

Along with the Trash folder, Files by Google is also picking up some minor design changes on Android 12. It’s still not the complete Material You overhaul, but there are a few clues about it. The app now appears to be using the Google Sans font. It also apparently adapted Material You’s bottom navigation bar, with an oval-shaped cyan bubble surrounding the icons. A later update might introduce all of the material you recolor in Files by Google.

Sharing near Google also replaces the app’s built-in sharing feature with the latest update. This is an expected change as nearby sharing is now available on all Android devices with Google mobile services. So there is no reason for Files by Google to have a separate file sharing feature on Android. If you remember, OnePlus removed the File Dash feature from the OnePlus File Manager app for this very reason.

This change in Files by Google had already been spotted during an APK teardown in March. Google has already detailed it on an official website support page. As the company explains, both devices must be running the latest version of Files by Google for Nearby Share to work properly. You can transfer up to 500 files at a time. The app will notify you when you reach the maximum number of files. Files received through Nearby Share are saved in the Files by Google Downloads folder. 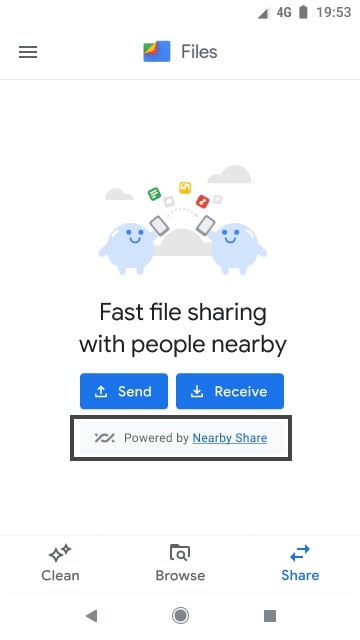 Google’s widespread Android app was a security risk … until recently

Snapchat’s TikTok clone has a big advantage for developers

Google added a search filter to the Android Stadia app