As you’ve probably already heard by now, Google has announced that free photo storage on Google Photos is going away. This news managed to shock quite a few people, as many of them are quite invested in Google Photos. Many people have thousands of images hosted by Google Photos, and many of them will have to find an alternative starting in June 2021. Well, you won’t have to do that if you’re willing to pay for storage, or if 15 GB of free Google storage (in general) is enough for you.

That being said, many people have tons of images to host, and even though their existing ones will remain in Google Photos for free (ones stored before June 2021), finding an alternative for future use is not easy. That being said, there aren’t many direct alternatives to Google Photos. In fact, there is not a single one that offers all the functionality Google Photos does. The Google Photos’ main feature was free storage for photos, and an amazing compression algorithm that managed to keep photos at a really high level when uploaded.

You won’t exactly find that in any other app. You have to pay for such services everywhere else, which is yet another reason Google Photos was so popular. There are, however, a number of alternative apps you can use if Google managed to anger you with this move, and you plan to switch from Google Photos. We’ve assembled a list of 10 apps which are Google Photos alternatives for Android, in a way. Some of these apps are great gallery apps with extra functionality, others allow you to host your images, while there are also some that help you re-route your images to a storage service.

Below is a quick overview of the top 10 best Google Photos app alternatives for Android 2021, including any download and in-app purchase costs.

Below is a little more information on each app, a suggestion for the type of user the app is best suited to, and a direct link for easy downloading.

All download links go to the app’s Google Play Store listing. Users are always recommended to download apps from Google Play or an authorized app store. 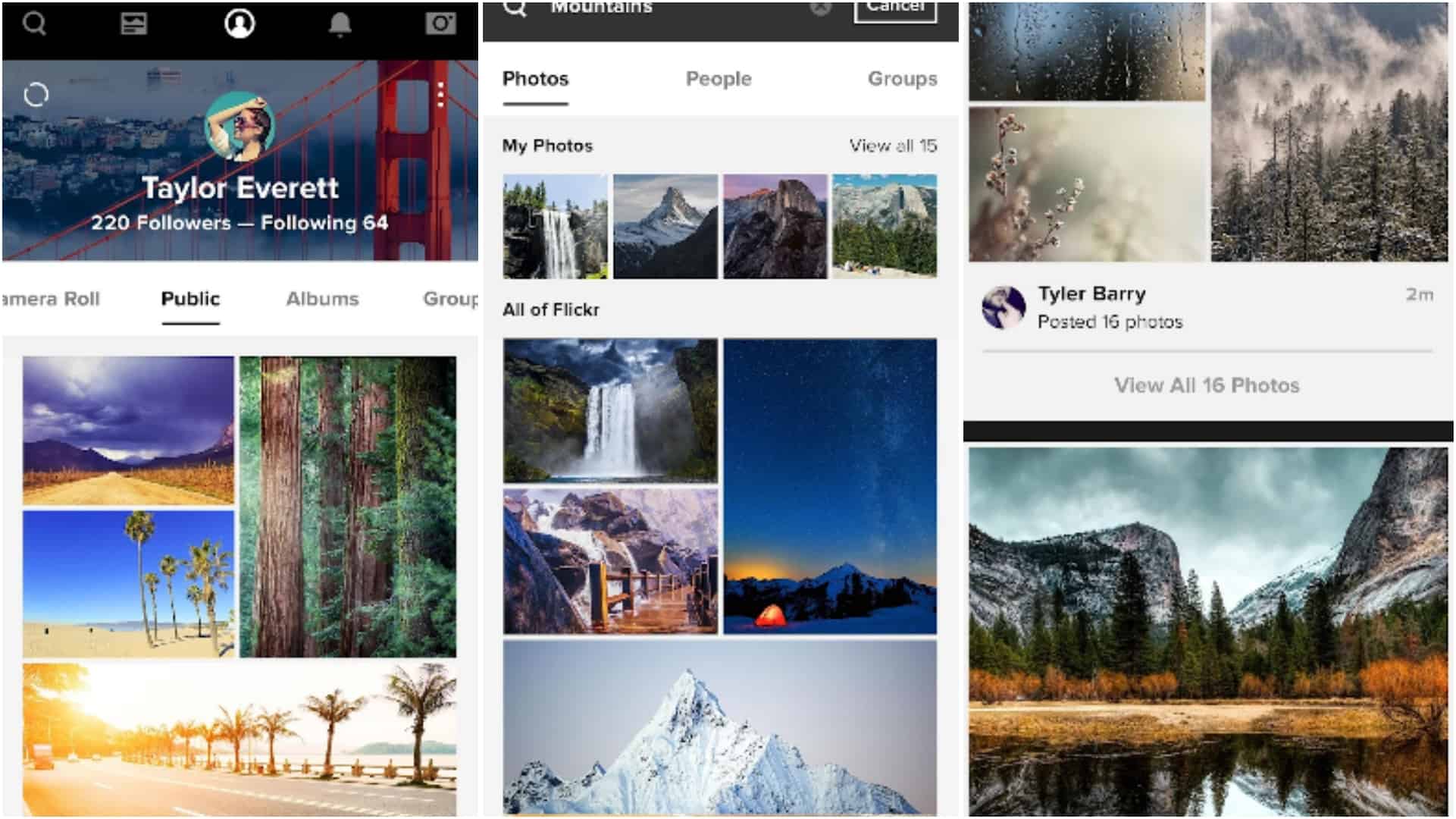 Flickr is a service that used to offer free photo storage backup. If that feature was still active, you could replace Google Photos’ main feature directly, but it’s not. Flickr used to offer 1 TB free user tier, which essentially means free storage, as the vast majority of people would find it hard to fill that up with photos. That being said, that feature is no longer available, as Flickr now allows you to store only 1,000 photos for free. For everything else, you’ll need a PRO subscription, which will set you back $50 a year.

Still, Flickr is used by many photographers, and it does store images in their full quality. The app allows you to organize your photos, and browse them with ease. You can also share them as you please, while some photo editing tools are also available. The app could offer a more functional design, if I’m being honest, as the current one doesn’t feel like the best solution. Still, it’s modern, and it may appeal to some of you. 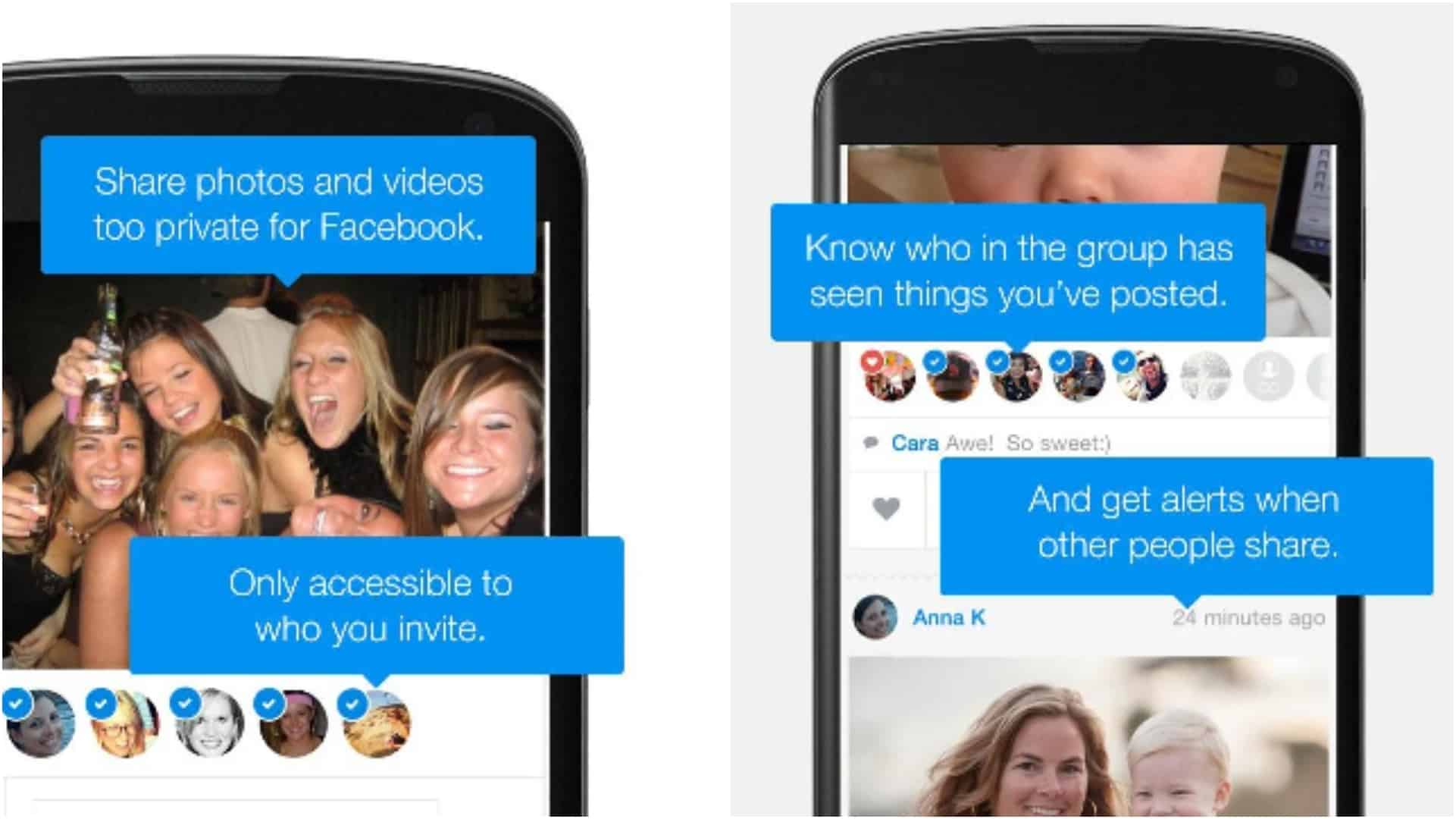 Cluster is a hybrid between a photo storage app, and a social media app. This app allows you to create ‘private spaces’ so that you can share your images with the people you care about. That is, at least, what the developer has marked this app as. This is kind of a private Instagram, which is a cross with a photo storage service as well. It’s difficult to explain until you try it, but it’s not exactly a direct replacement for Google Photos either, as it offers a different approach.

The developer puts great emphasis on privacy in this app. Images you upload will be visible only to people you want, of course. People will also be able to comment on those images, if you wallow them. So, if you want a semi-social network for picture sharing, this may be it. Cluster also offers a really nice design for you to enjoy as you use the app, which is another positive for this app. 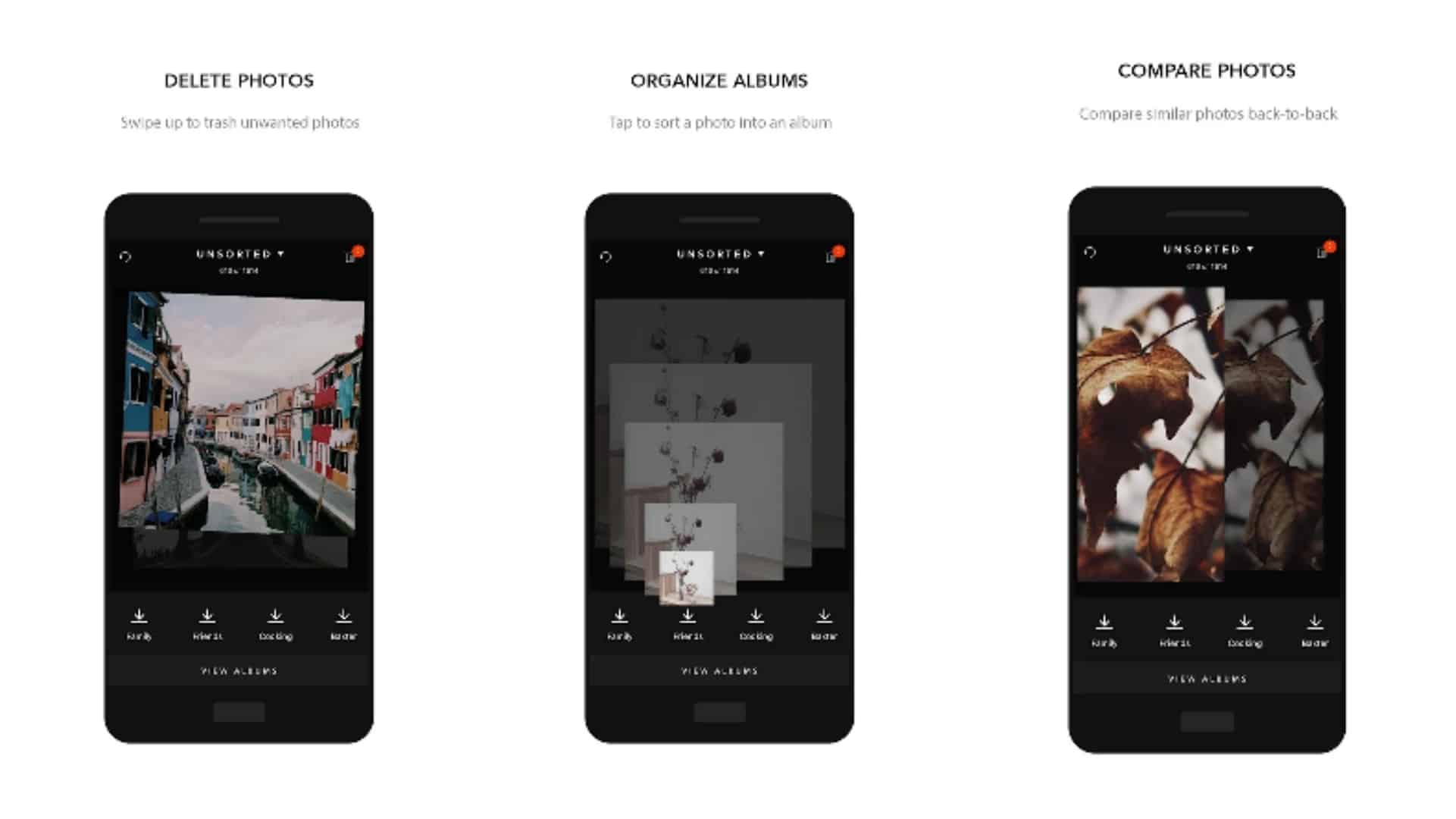 Slidebox is an app for organizing your photos, and it’s really good at it. That is one feature that this app has over Google Photos, as Google Photos was never good in that aspect. Sure it allowed you to search for pictures, and put them in albums, but things got complicated along the way. If you don’t upload images straight away, and you wanted to organize them into albums from your phone, you had to dig through the timeline to find them, and then add them to an album. That’s just one example, as several other features are missing.

Slidebox does things in a different way. This app actually uses a Tinder-like approach to help you organize images. You can create an album first, and then open the gallery. From there, you will be able to swipe your photo left or right to keep scrolling, swipe up to delete it, and tap one of the folders you want to put a specific picture in. This is a really interesting approach that some of you may appreciate.

PhotoSync is a really interesting app. It allows you to easily transfer, backup, and share your photos and videos between your Android phone, iOS, computer, cloud, and so on… wirelessly. Whatever you need to transfer, PhotoSync is the solution. This app is highly rated in the Play Store for a good reason. If you’re planning to step away from Google Photos, this app can be useful after you download all your images. It can help you transfer them to a cloud service, another device, or somewhere else.

This app can also automatically backup photos and videos in the background, similar to what Google Photos was doing. All you have to do is select where you’d like to backup them, and PhotoSync will do the rest. The app’s UI is really simple, and it’s easy to use, which is a great thing with apps like these. PhotoSync is basically the ultimate solution when it comes to transferring and backing up your photos and videos. 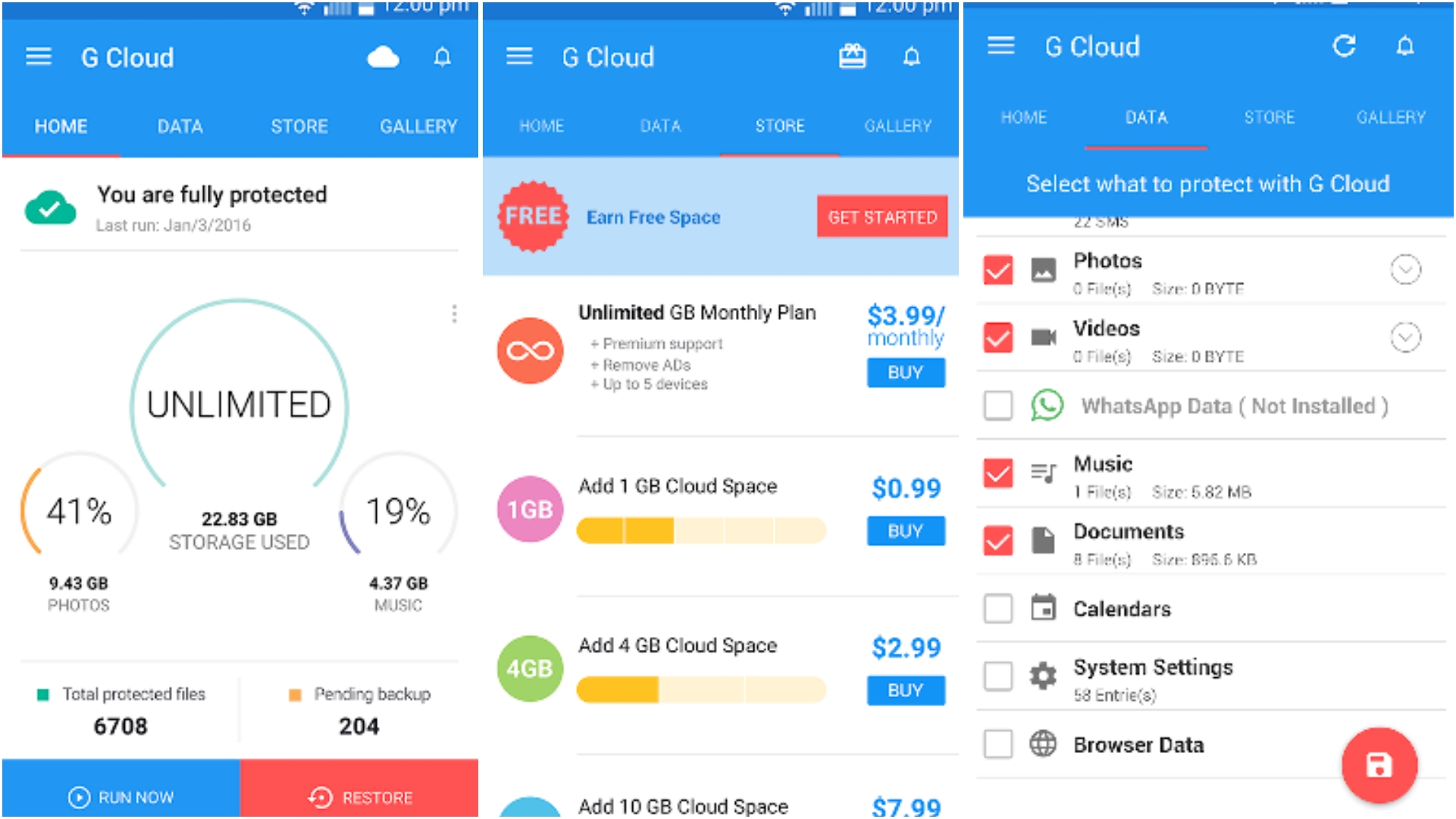 G Cloud Backup is a great service for backing up files, and that includes both images and videos. This service starts you up with 1GB free cloud storage, and lets you earn up to 10GB after that. So, this is not a free solution either, but it’s a great backup alternative, if you’re planning to backup some other files as well, or you simply want to step away from Google in general.

This app allows you to backup your SMS messages, contacts, call logs, documents, settings, photos (full resolution), videos, music, and so much more. You can protect the app with a passcode, while the data transfer is completely secure, says the developer. You can even backup external SD cards with this app, if that’s something you need. Once it’s time to restore files, this app can do that as well, so it’s ideal for transferring stuff to a brand new smartphone, for example. 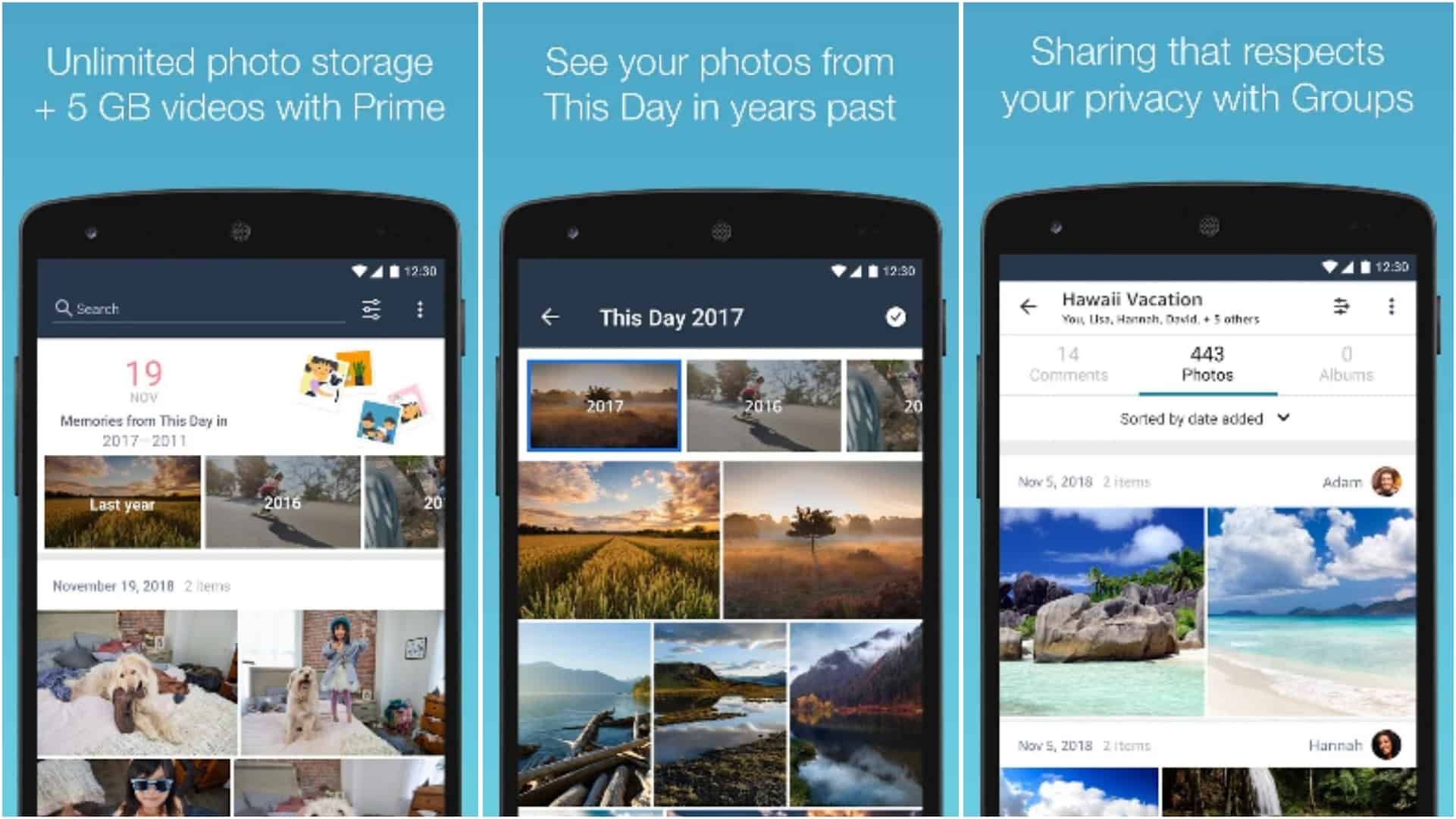 Amazon Photos is closer to being a direct replacement to Google Photos than any other apps on the list… well, with the exception of Flickr, maybe. This app gives you 5 GB of free cloud storage for your photos and videos. If you’re a Prime member, you have access to unlimited full-resolution photo storage and 5GB of video storage. So, that’s a great perk, and this can become your direct Google Photos alternative if you’re a Prime member.

You can share your photos and videos with people using this app, without a problem. It also allows you to view those images and videos on other devices, thanks to various casting capabilities. You can also search for images by using keyboards, and the app can also automatically backup your photos. The app’s design is clean, and the whole focus is on images and videos, as it should be. 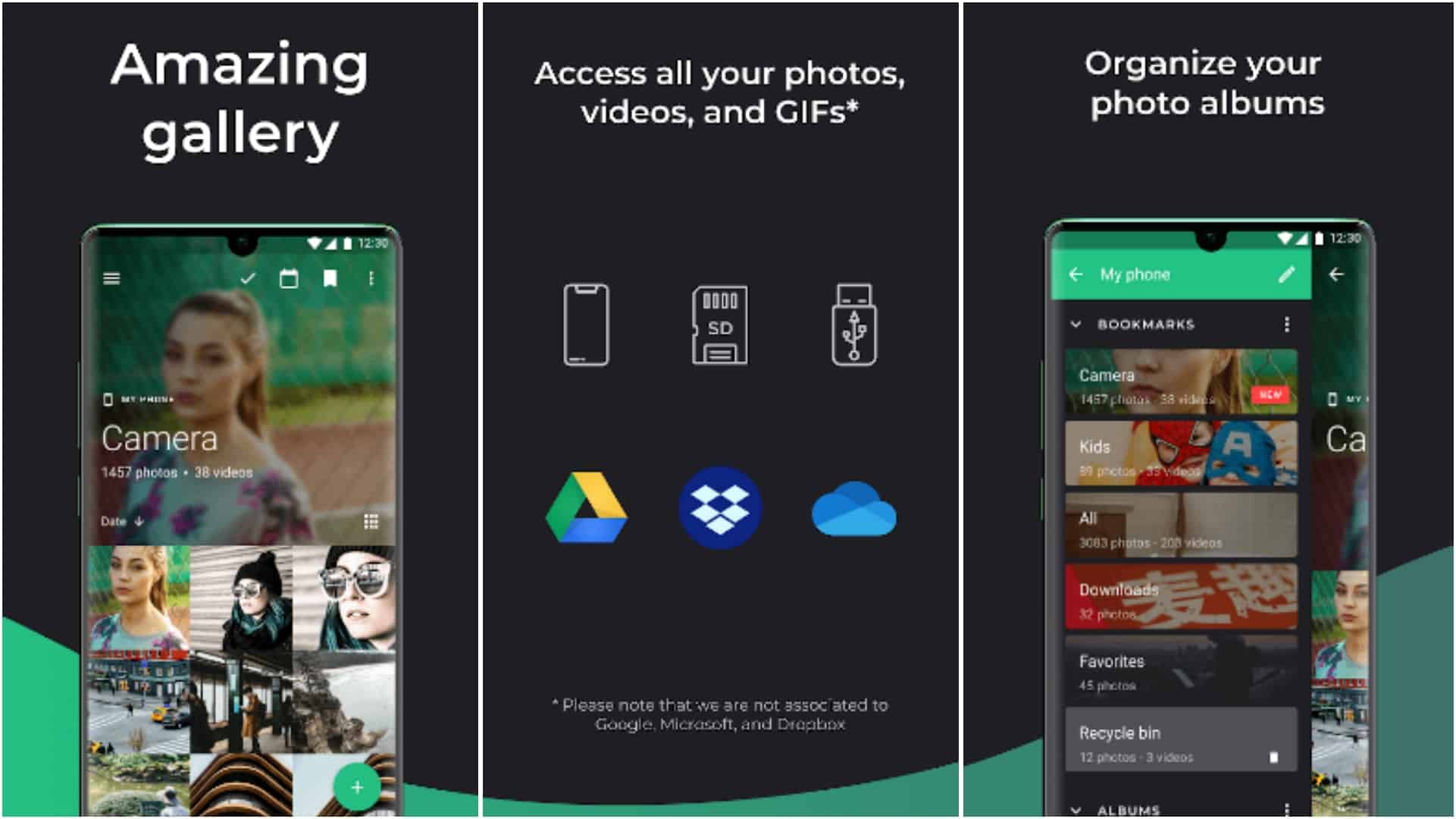 Piktures is not a cloud storage service or anything of the sort. It is, however, a great gallery app for your Android phone, that does some things similar to Google Photos. Its interface is excellent, and is one of the main reasons to use this app. The second big reason is, it automatically organizes your photos by date and location, somewhat similar to what Google Photos is offering.

You even get a calendar view in this app, so that you can see how many images you’ve taken on a specific day or month. This app even allows you to sync images and videos to Dropbox and Google Drive, if you want, and it supports automatic syncing as well. You can protect it with a PIN code, and the app is free to use. Do note that a premium subscription for Piktures is available. 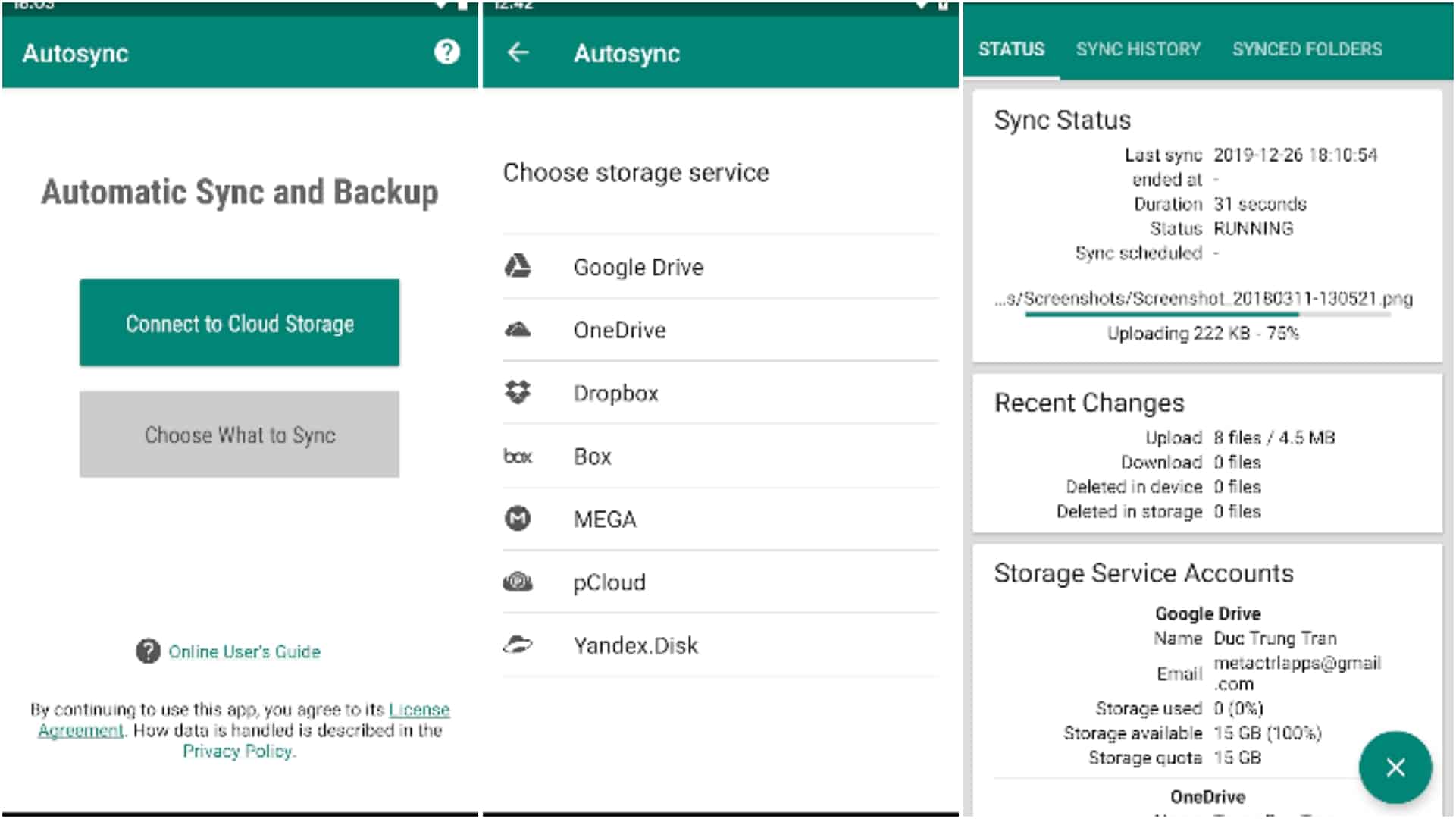 Autosync is a really interesting app, or should we say apps. MetaCtrl released a series of Autosync apps, which are available for Google Drive, Dropbox, Box, OneDrive, and MEGA. All of those are separate apps for the services you use. There is one universal app available in the Play Store, though, but it’s still in development. Another thing to note is, this app is not free. You can use it during the trial period, but once that ends, you’ll need to purchase it.

That being said, if you plan on downloading all your Google Photos content, and transfer it somewhere else, you may need an app that can sync stuff automatically. That’s where Autosync comes in. It’s an automatic sync and backup tool, that can sync specific folders from your device. The app supports a number of cloud services, while it also supports WebDAV protocol, and LAN/SMB network drives.

Solid Explorer, as many of you already know, is a file manager app. This is one of the best file managers on Android, not just because of the features it offers, but its UI as well. That being said, if set up properly, Solid Explorer can be a truly powerful backup tool. It supports microSD cards, along with a ton of cloud services. So, chances are this app will have you covered no matter what you use.

If you use several cloud services, you can use all of them from this application. You can set up backups to FTP servers if you want as well, without a problem. This could be a great solution if you download your Google Photos library, and need to sync it somewhere else. The app also supports batch rename, themes, icon sets, while it allows you to analyze storage as well. Security is also on a very high level here.

MEGA is a cloud storage alternative to Google Drive, Dropbox, Box, and every other cloud storage service out there. The thing is, MEGA offers more free storage than any of those services. You will get 50 GB of free cloud storage if you start using this application. 50 GB sure sounds better than the 15 GB that Google is offering, and that is what you’ll have to deal with from June 2021.

That being said, You can get way more storage on MEGA if you pay up. You can grab 400 GB for €4.99 a month, and 2 TB for €9.99 a month. You can also pay yearly and save even more cash. MEGA also offers an incredibly clean UI, which is a joy to use. This app has been around for quite some time now, and despite the fact there are still some issues users are pointing out, it’s a solid and free / affordable alternative for storing images and videos.