RGB lighting has become synonymous with gaming over the years and this has spilled over into the ROG Phone 5. It’s also featured on all versions of the ROG Phone since the ROG Phone became a thing in 2018.

Basically ASUS loves games and loves RGB lighting, so the ROG Phone 5 had to continue this trend by adding functionality in some way, or shape, or form. Whether you love RGB lighting just as much as ASUS or not, the company is committed to making the lighting more than turn on and off and cycle through the colors.

While there are many different lighting effects, one of the coolest things about ROG Phone 5 is the ability to sync the RGB logos on the back. Again, this is something that has been around since the original ROG Phone. Now you can’t do just that with the ROG Phone 5 Ultimate. Not the same way you would with two ROG Phone 5 devices.

And the only reason is that the Ultimate model has a monochromatic ROG Vision display. So while you can sync lighting on ROG Phone 5 Ultimate, you can only do so when the AeroActive Cooler 5 accessory is on the device. The same goes for the ROG Phone 5 Pro.

How to sync lighting on ROG Phone 5

Before you can sync your device’s lighting, you need to know where it is. Fortunately, it’s located where you potentially expect it to be. So let’s start there.

Lighting options can be found in the Armory Crate app. So your first order of business is to open that up and scroll down until you find the lighting section.

It should be borne in mind that if you have the ROG Phone 5 Ultimate, and probably the Pro, the light sync feature will only appear if you’ve connected the AeroActive Cooler 5. So slap that bad boy. before going further.

Now that the fan mount is activated, activate the light toggle to turn on the system light. If you own the standard ROG Phone 5, you obviously won’t need the fan.

Just below the system lighting rocker, there is a rocker for synchronization. Once you’ve enabled it, two options will be available. One to create a group and one to join a group. Decide which phone you want to be the group creator or the “host” phone.

Whatever lighting effects you choose, all other phones connected to that group will display those effects.

Scan the QR code on the host phone

Once the group is created, the host phone will display a screen containing a QR code. You will need to scan this QR code with the camera on any other ROG Phone that you try to sync the lighting with. Scanning should only take a few seconds. You will also only have to do this once.

At any time in the future, if you want to synchronize the lighting again, the name of the host phone will appear in a my devices list of phones joining the group and you can just tap on it.

That’s really all there is to the timing part. But there are still things you can DIY. 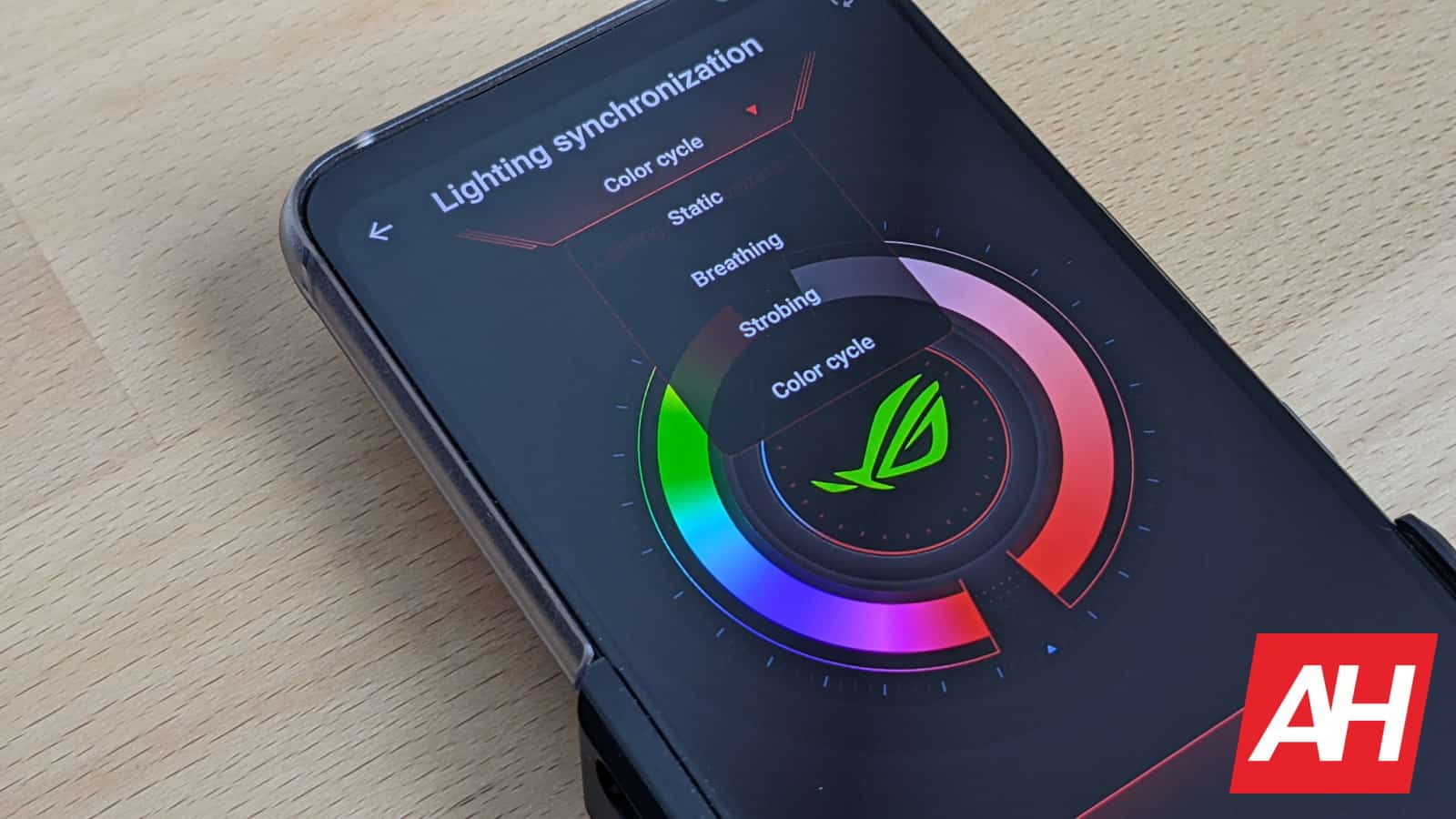 ROG Phone 5 has a nice little selection of RGB effects you can choose from. Eight in total. However, not all of these are available if you turn on in a synchronized fashion. In total, there are four effects in the list for synchronization. This includes the following. 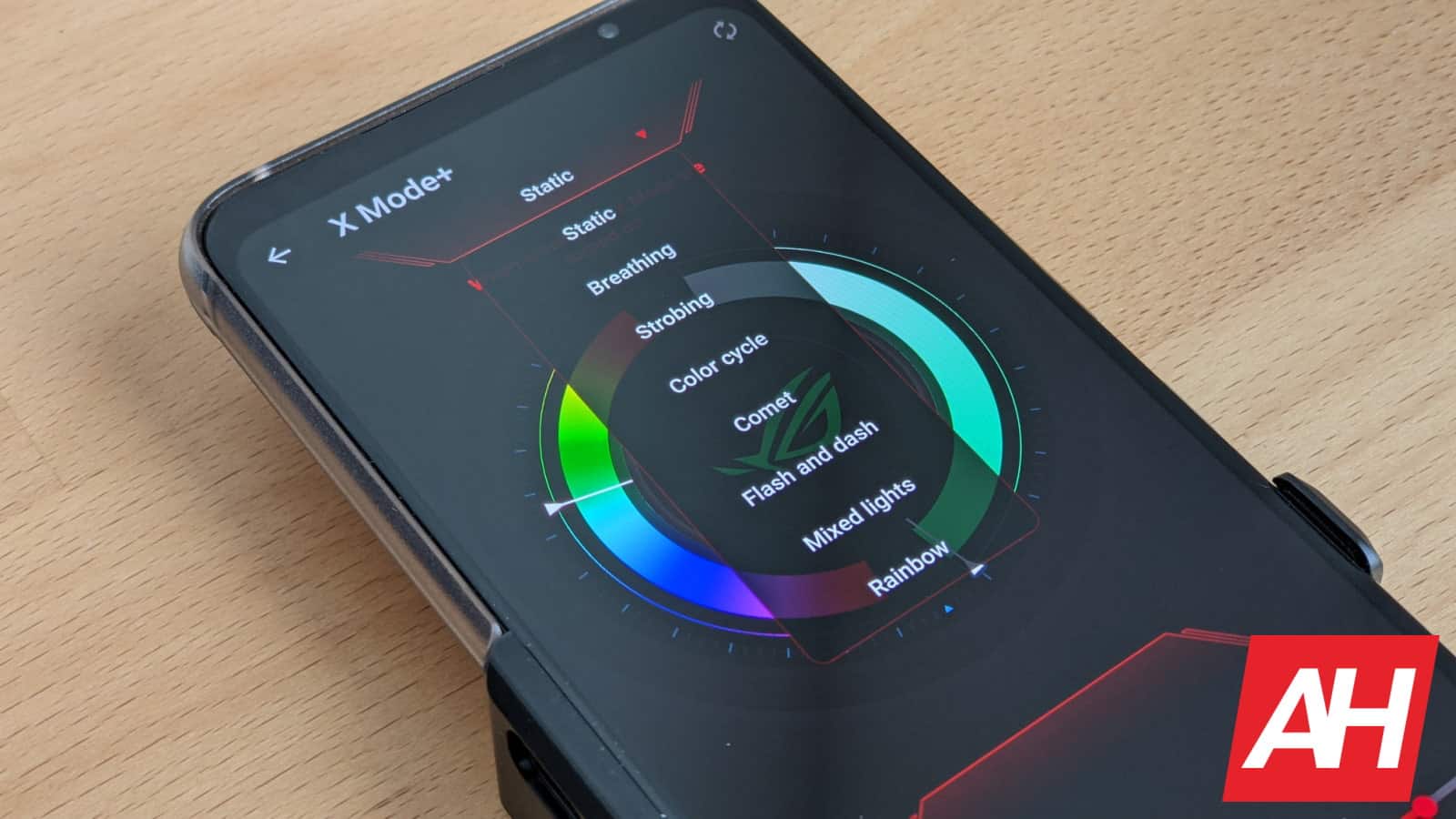 As stated above, there are four other lighting effects besides those already mentioned. In addition, the ones mentioned above also have more settings when they are in their unsynchronized mode. Like the brightness and speed of the effect. Which cannot be adjusted when syncing.

The four additional lighting effects that you can only use when not in sync with another device are: