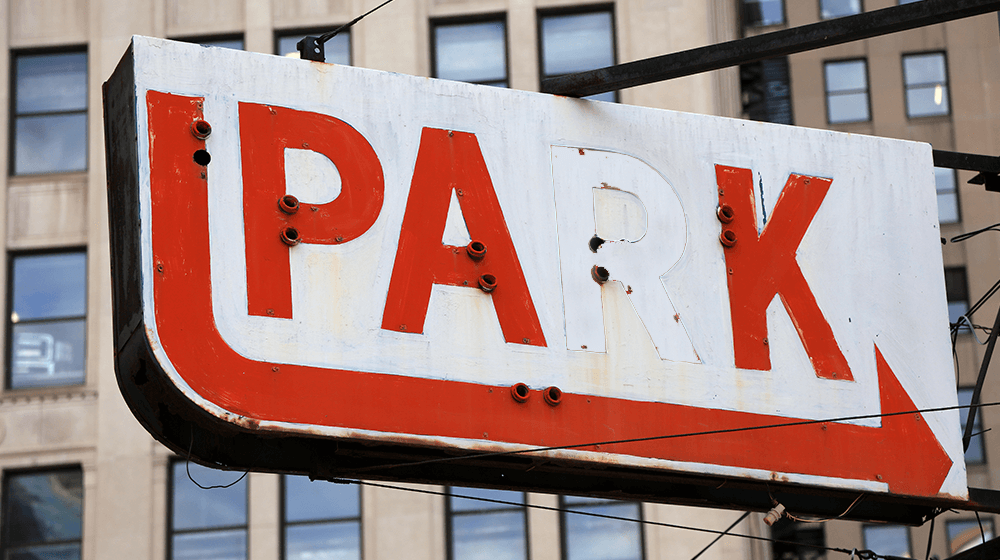 Some of life’s funniest moments are completely accidental. That’s definitely the case when it comes to some of the funniest and most hilarious signs. Whether they arose from careless design, normal wear and tear or human intervention, a funny sign fail can bring smiles to faces while causing inconvenience or even lost business for an establishment. It’s hard not to take these silly signs literally and laugh at the humorous faux pas.

No matter what they were supposed to say, we can’t help but be grateful for the mistakes on these funny sign fails. Unfortunately, it’s unlikely the business owner enjoyed the mistaken advertisement quite as much. What else can you do but laugh at the funny sign fails? 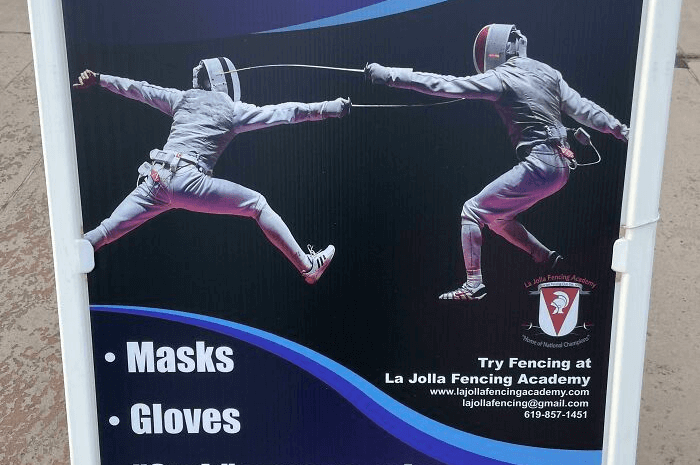 This sign for a fencing academy doesn’t include any typos or formatting mistakes, but we can’t help but think the business owner might not have delivered their intended message, either. Or maybe it was. Covid-related craziness left plenty of people wanting to stab somebody, after all. 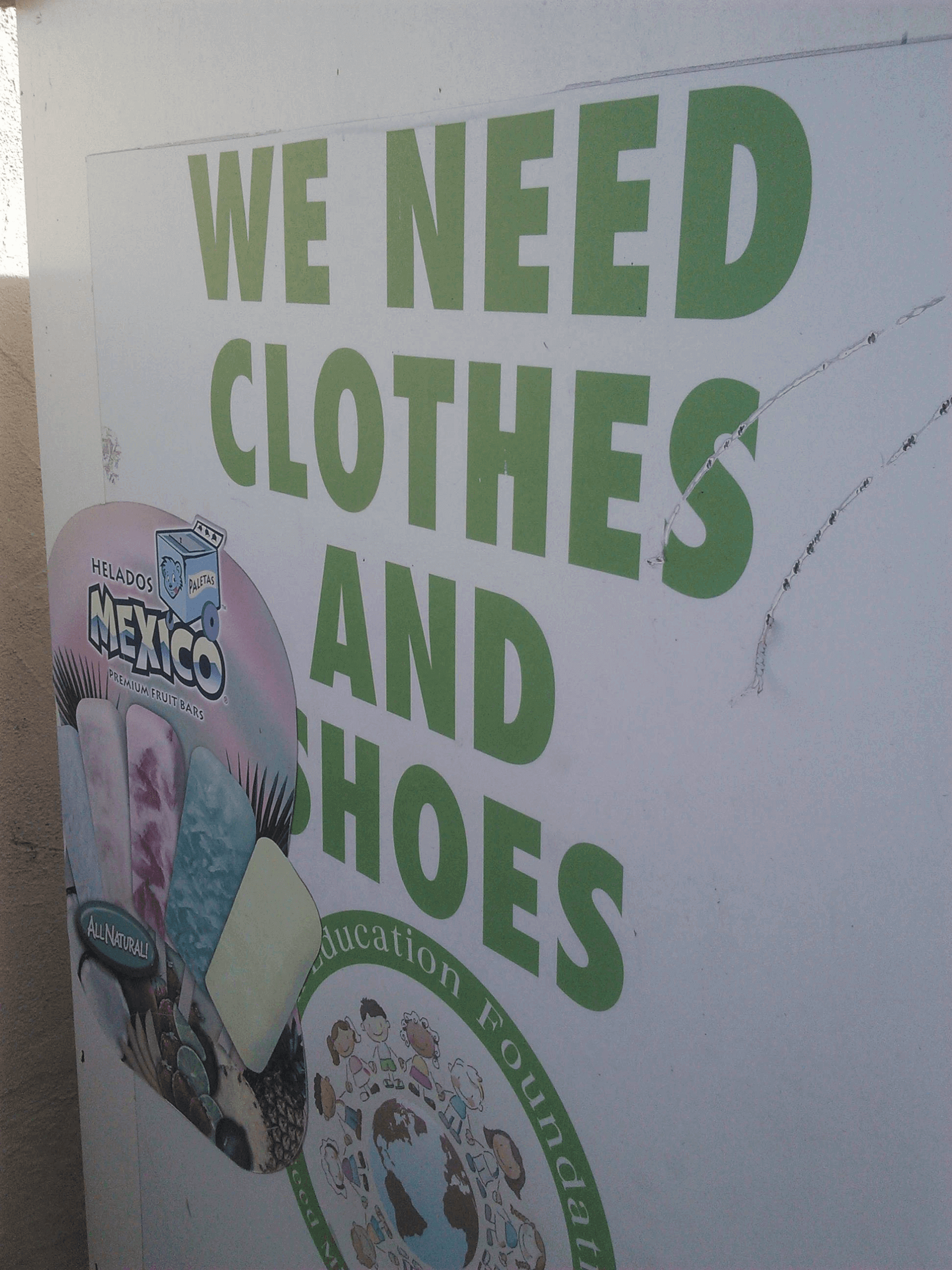 Some of the funniest signs ended up that way thanks to a clever prankster. In this advertisement for a charitable drive, someone thought they’d be smart and shorten the word “shoes.” It might not be what the clothing drive is looking for, but this funny sign fail is sure more entertaining. 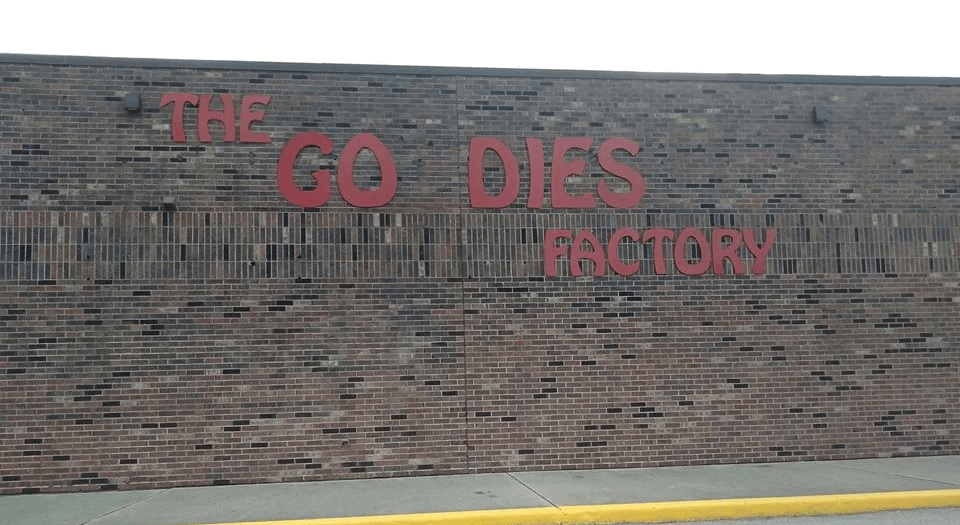 A missing letter can completely transform the message of a sign. We doubt the owner of this store intended to verbally assault its customers when it hung this sign on its storefront. Will patrons laugh at the funny sign, or will they run in the opposite direction?

4. This Tire’s For You, Macho Man Randy Savage 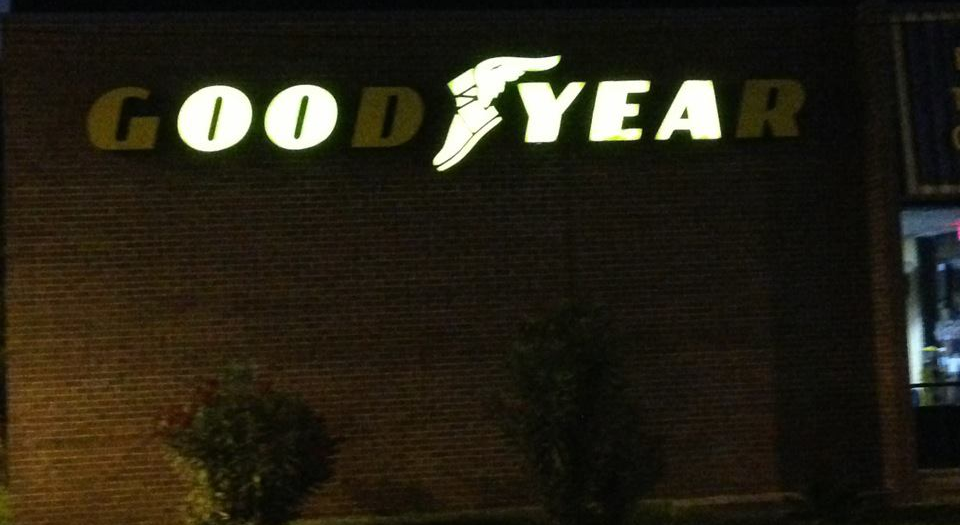 Lighted signs are notorious for some of the funniest sign fails. All it takes is a blown bulb or two, and the message can change from a company’s name to something far funnier. Such was the case for this Goodyear sign. Is that you, Macho Man Randy Savage? Ooooh yeah! Now, that’s a funny sign fail!

Restaurant signs are some of the most visible, and restaurants’ funny sign fails are some of the best sign fails. Whether it was a design error or a burned-out light bulb, we appreciate the mishaps that created these hilarious and fun displays, no matter what they were supposed to say. 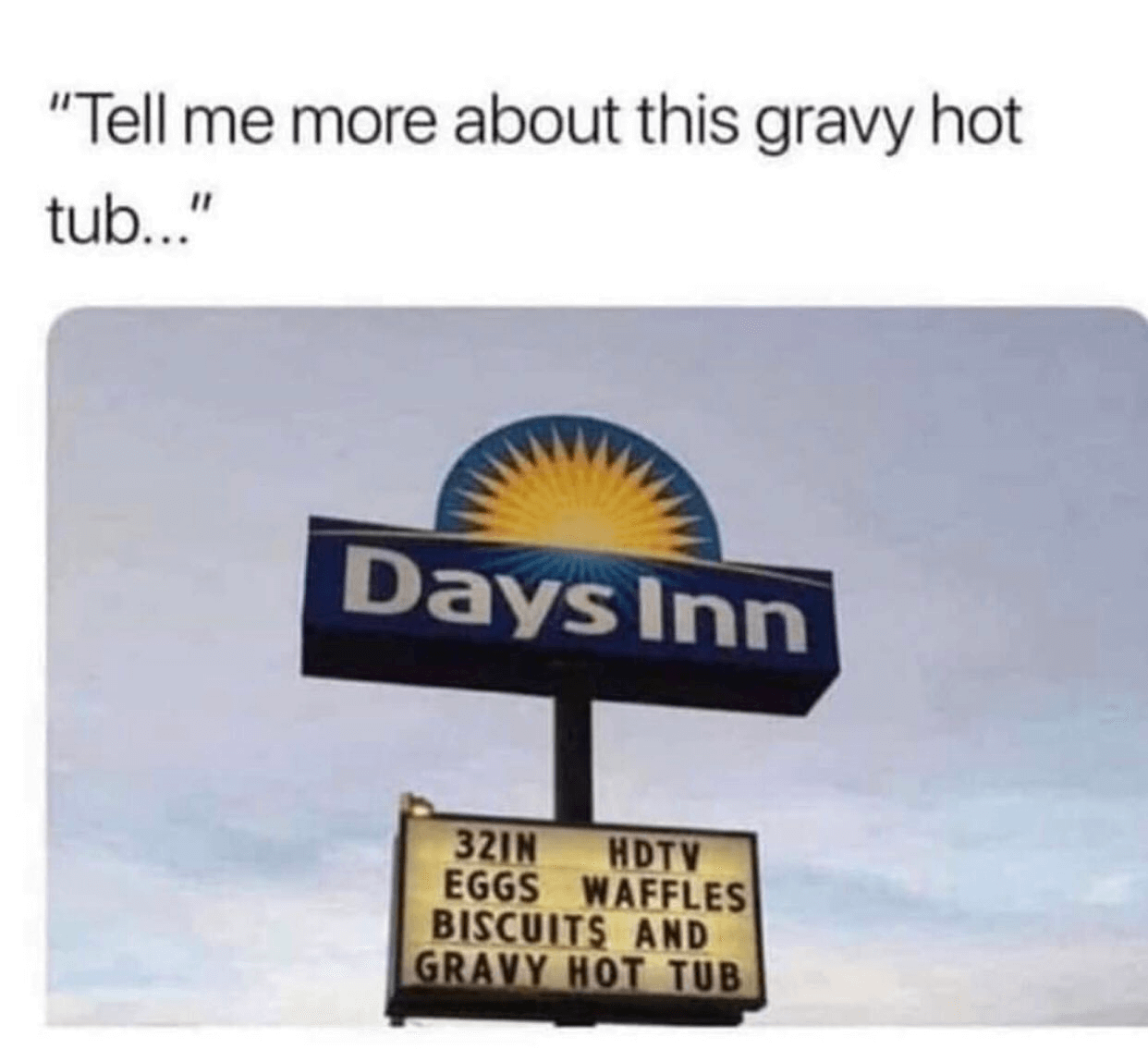 After a long day on the road, nothing sounds better than taking a hot meal and a relaxing soak in a hot tub. Why not save time and take that bath in some scrumptious gravy like the one described in this funny picture. It’s great for your complexion!

6. Now Serving Chili Dogs in a Can 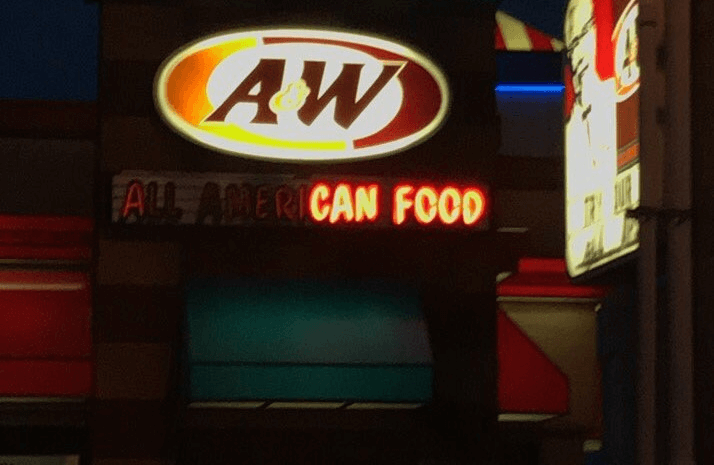 Another sign fail caused by faulty light bulbs. Somehow we don’t think A&W patrons are showing up for some mouthwatering cans of burgers and fries. At least it has a long shelf life! 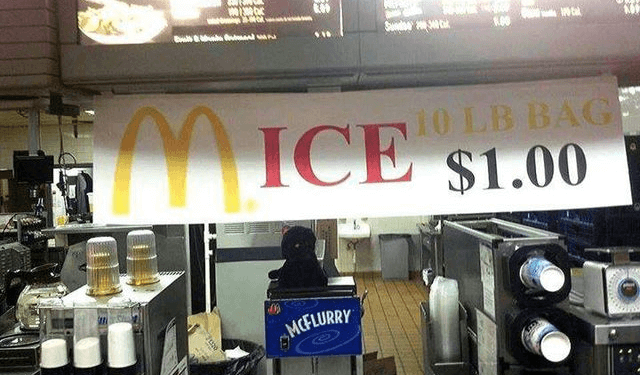 We get that McDonald’s loves its Golden Arches logo, but whoever designed this sign needed to take a second look at the message. Since when are rodents on the official menu at this restaurant? And isn’t $10 a little steep for a sack of vermin?

8. When Neon Signs Do You Wrong 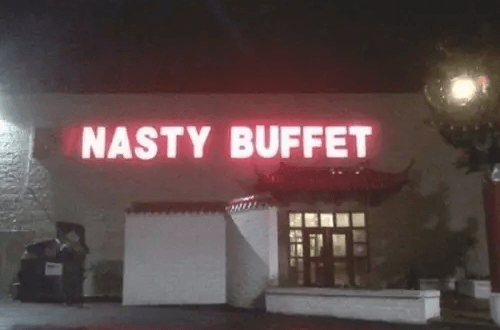 Faulty light bulbs strike again in this interesting example of a sign fail. The Dynasty Buffet owner should have stocked up on some extra bulbs to avoid what was only bound to happen eventually. Welcome, it’s the nasty buffet!

Stores are filled with so many signs, it’s only natural that a few of them will have some errors. Fortunately for all of us, some of these failed store signs result in a laugh and a smile.

9. My OJ Tastes a Little Sour 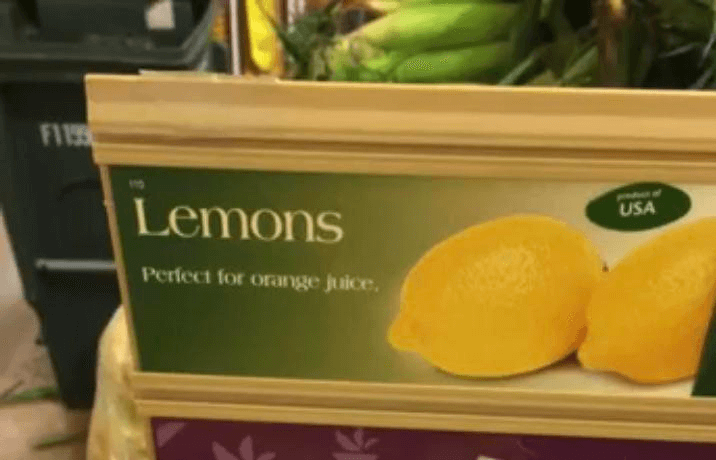 Another example of a graphic designer who wasn’t paying attention, we wonder if anybody bothered to read this sign fail before displaying this advertisement for lemons. Making orange juice? Pucker up, buttercup!

10. This Sign Only Fails for a Few More Days 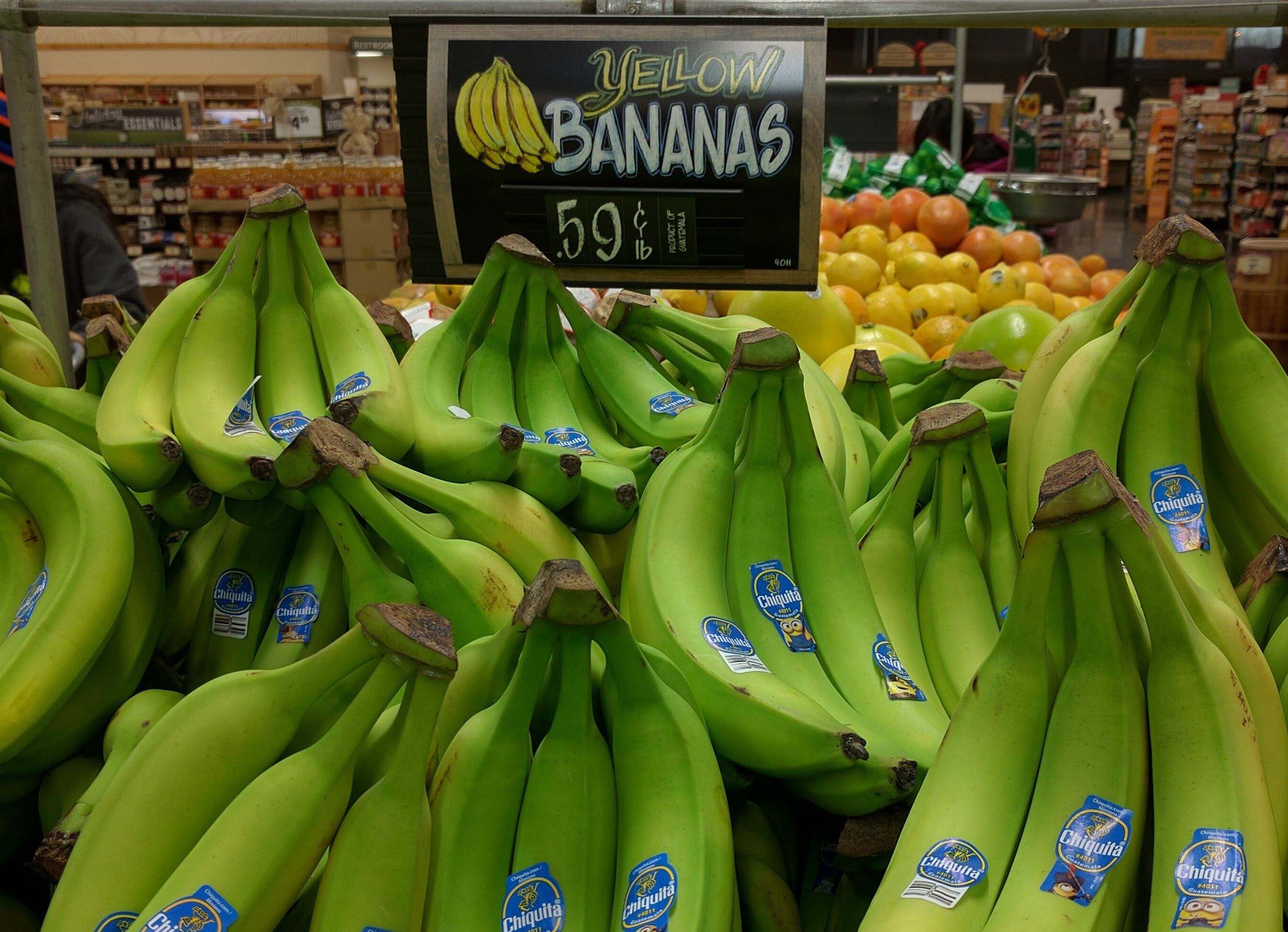 Somebody at this store got a little too anxious to display their “yellow” bananas. Fortunately for this business owner, this sign fail will be corrected in a couple of more days. We wonder how many comments the grocer got.

11. Save Nothing for a Limited Time 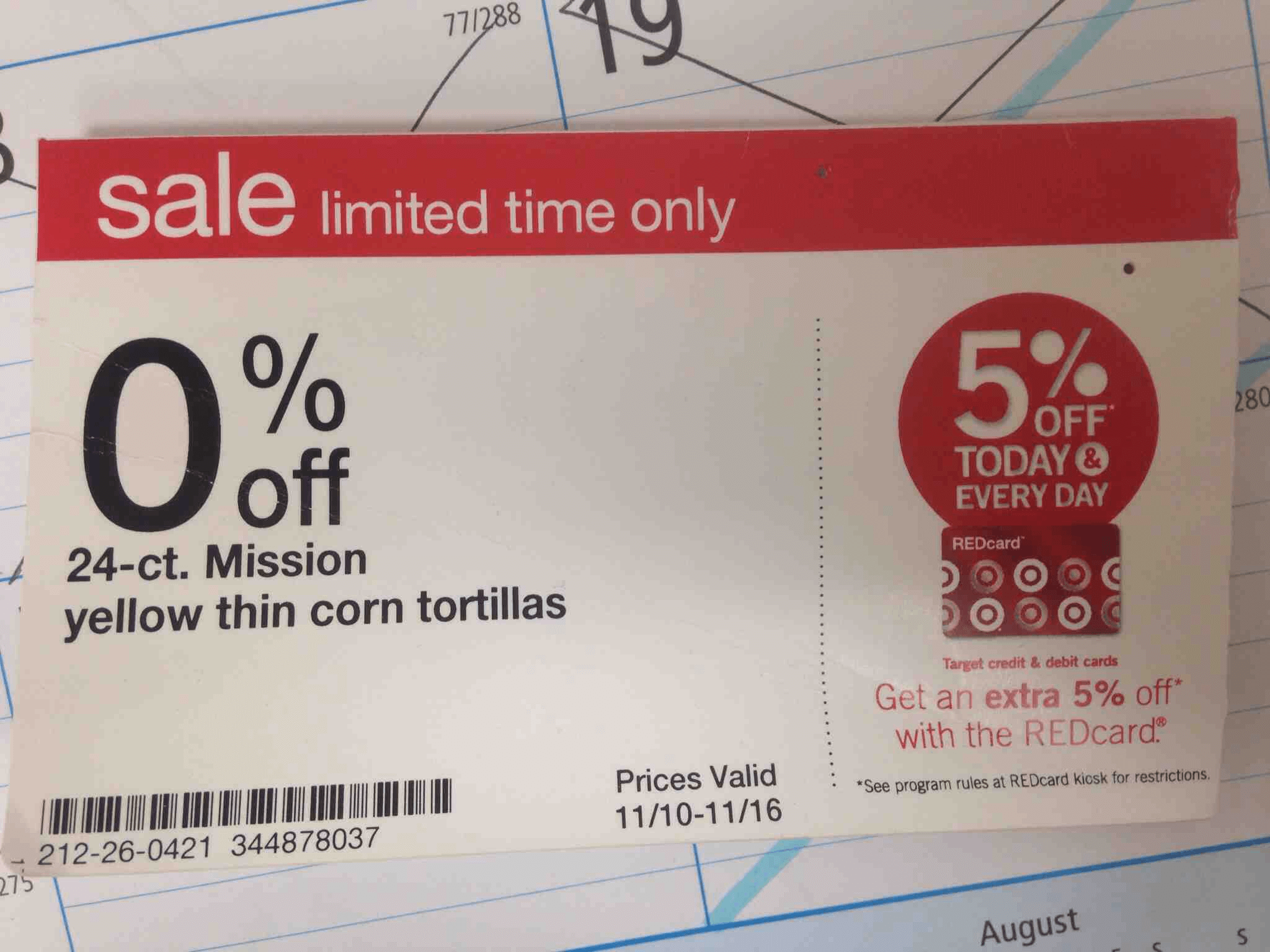 A likely printing error led to this fun sign fail from Target. Shoppers will be so grateful to know they saved an extra nothing off of those yellow tortillas. Somebody obviously needs to read what they print before they hang it.

12. It’s the Point of No Return at This Liquor Store 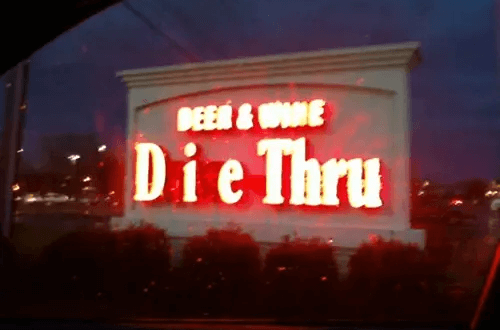 In yet another hilarious case of a faulty neon lightbulb, this liquor store’s sign now welcomes its customers with an invitation to die. What exactly are they putting in that booze, anyway?

Who doesn’t love some good toilet humor? It’s just a funny subject. After all, everybody uses the facilities at some point during the day. Even better is accidental toilet humor caused by convenient sign fails.

13. Thanks for the Encouragement, But We’re Good 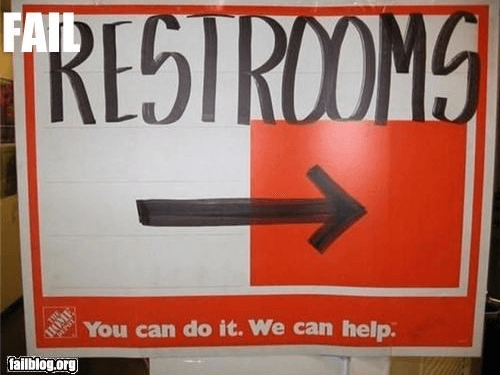 We know the graphic designer who created this sign from Home Depot didn’t intend it to be used for restrooms, but we’re sure glad it was! Was this sign selected at random, or was it employees showcasing their personality?

14. Sounds Like a Personal Issue … Good Thing You’re at a Walgreens 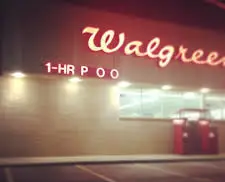 OK, so this sign wasn’t displayed in a toilet, but it sure creates some effective toilet humor. In fact, we have to wonder if the fluorescent lights themselves weren’t displaying a sense of humor in choosing to burn out in such a hilarious sequence. Is there a line for the restroom at Walgreen’s?

15. There Better Not Be Nukes In Your Pockets 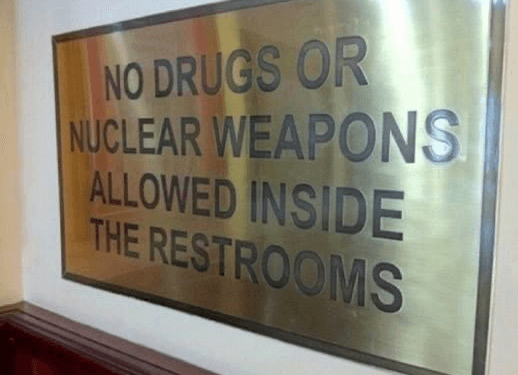 Then you have the sign fails that occur because the graphic designer speaks a different language and terms get mistranslated. We have to believe that’s what happened when this sign was created. Surely nobody is concerned about atomic bombs sneaking into the restroom… or are they? 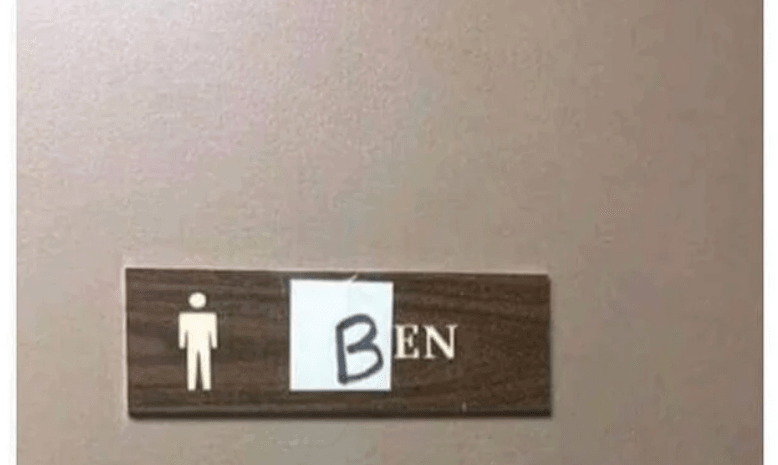 We’ve all been tempted to take control over a bathroom in the workplace. Sometimes you just need a little extra privacy than what a stall can provide. It looks like an employee named Ben figured out how to score that coveted privacy by altering this sign. Is this a sign fail, or a sign win?

Sign fails like these and plenty of others might be hilarious to read, but they can become horror stories for small business owners. Be sure and always check your signage – including sign font, graphics, alignment and spacing – before printing it and especially before displaying it, or a sign fail could happen to you.

Is It Really Possible to Isolate Russia from the Global Economy?