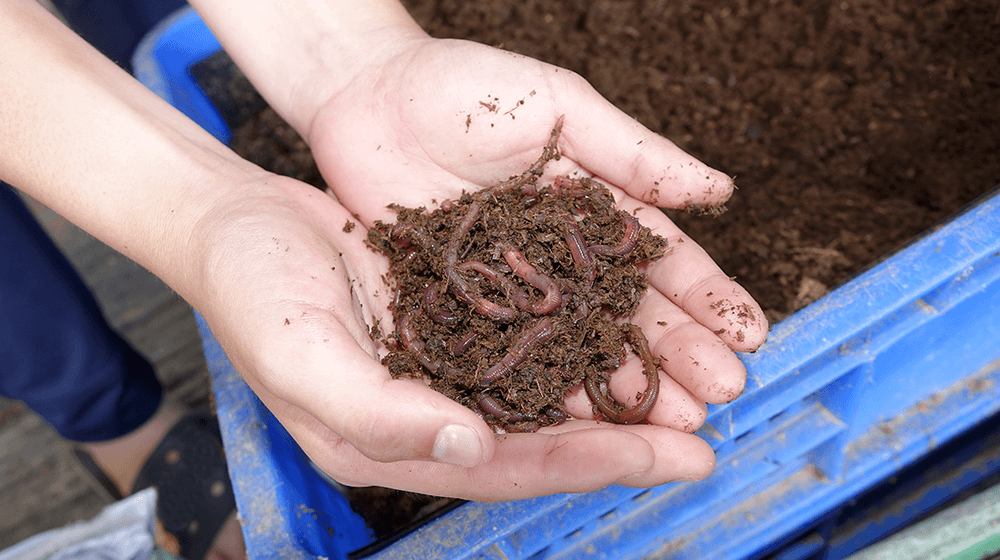 If you’re looking for a business you can start at home, worm farming is a great choice.

You need a warm, dark and dry area. You can get started with a homemade worm farm or purchase a new worm farm kit.

Who is buying worms?

Earthworms are treasured by gardeners. Increasingly, they are also treasured by businesses small and large that use the wriggly darlings to turn organic waste products into nutrient rich compost.

Cleopatra passed a law that prohibited the removal of earthworms from Egypt. She valued them for the way they improved the rich soils of the region.

What is a Worm Farm?

In simple terms, worm farms are a community of worms. Worm farming is also called Vermiculture.

Worms multiply as they recycle scrap food and other organic waste into compost. You can sell the worms and/or the compost.

How Does a Worm Farm Make Money?

Worm farming is increasing in popularity, which makes it much easier to make money. The same goes for other insects and mushrooms. If you are looking into worms, it is also worth knowing how to start a cricket farm or how to start a mushroom farm.

How Much Money can you make Starting a Worm Farm?

You can sell the worms by the numbers or by the pound. Current prices are $10 for 300 worms or about $30 per pound. The worm castings (yep, their poop) sell for about $3 a pound.

2,000 worms will weigh about 2 pounds. Every 2 pounds of worms need one pound of worm food per day.

Let’s say you have a good source of organic material (food scraps) you can use to feed all the worms. In a month, your 2,000 worms will produce about 666 pounds of worm castings per month. That’s worth about $2,000.

And they’ll also be using that warm, dark, dry ambiance to product more worms. In the bedding you’ll see small oval balls, which are worm eggs. Each egg should hold several worms.

How much can you make? That depends on how many worms you have.

How to start a worm farm is not rocket science. With the right set up your labor will be minimized, and you’ll also be likely to raise healthy worms.

1. Name, Brand, and Register Your Business

Before you choose a name, check with your secretary of state to make sure the name has not already been taken. Choose a name that reflects the type of customer you seek. A catchy name will help you brand the business.

All businesses should have a written plan for establishing, maintaining and growing your business, and worm farms aren’t exempt from this requirement.

Also develop a mission statement which describes your reasons for running this type of business.

Include your estimates for expenses and income, and a plan for expansion.

Check with your state Department of Agriculture for any special permits you may need for worm farming. For example, you will most likely need an intrastate transport permit if you’re selling worms across state lines.

There are about 3,000 kinds of worms. The ones you’ll sell are earthworms, and there are 3 main types of earthworms. One type stays in the soil and one type lives in deep, vertical burrows in the soils. You don’t want either one of those types.

Worm farms use Epigeic worms, which live on top of the soil and feed on organic matter. The most common ones used are red wrigglers, which multiply rapidly to increase your worm population.

Choose from one of the following business types:

As previously stated, feeding is a ratio of 2 to 1. Every 2 pounds of worms need 1 pound of food on a daily basis.

The best course of action is to feed daily. That way you won’t have annoyances such as odor or fruit flies coming from your organic food source.

The list of necessary equipment is simple: the worm bins, a drill and spade bit (for making holes), gloves, large and small turning forks (for the compost), trowels, composter.

You can make a worm bin. You can have a small worm farm or grow to be commercial size.

The worm bed area needs to be kept between 40 and 80 degrees. You can use a wood or plastic bin. In fact, many make their first bins using an old dresser – making sure to first drill holes in the bottoms of each drawer before adding worm bedding. An old dresser makes a good worm house. Plastic bins are easier to clean and sanitize.

You can buy a ready-made worm first bin on Amazon for about $50 and add a second bin or two later.

Set up the bin inside by starting with a layer of newspaper or cardboard/paper grocery bag on the bottom. Add your prepared compost on top of that. You can buy compost or make your own to create a

You can make your own finished compost bin by combining ingredients such as garden soil, coffee grounds, leaves, fresh horse manure, shredded newspaper (or other shredded paper), crushed egg shells and other material. Fresh manure will contain weed seeds but that’s okay. You’ll need a big pitchfork to turn the compost as it ages. Moist bedding is okay, but there should not be excess moisture.

Once you’ve added enough compost to the bin (leaving room on top for the layer of food and a covering), you can add kitchen scraps such as vegetable scraps, other food scraps and even some fresh food such as citrus fruits. Rotting food waste should be used to make compost, and not used to feed the worms.

9. Introduce Worms to the Bin

Add worms to the worm composting bin, spreading them out to keep the worms happy.

Cover the worms with about 5 sheets of moist newspaper (soak the sheets and wring them out). Worms are very shy of light and will only eat covered food scraps. They won’t work within exposed food.

Add food scraps to your worm factory daily. In about a month your bin will be filled with valuable worm compost.

Offer to come to schools and talk with students about how worms work and all the benefits they provide. Offer to donate a starter worm farm to a science class.

Here’s a cool fact about worms – those red wigglers are crazy about pumpkin, cantelope and watermelon. Just before harvest, you can withhold food for a day and then provide one or all of those three foods. The worms will swarm to the top of the bin.

You’ll have to lay out portions of the bin material on tarps or plastic lids. Once you’ve picked out the worms, you can create the worm casting leachate. The compost worms produce worm castings, enriching the soil.

The compost tea, make from soaking the castings-rich soil in water, is a great soil nutrient.

Or you can pick out the castings and sell them for about $3 a pound.

Customer service is the key to the growth of any enterprise. Whether it is a fish farming business or worms, getting the word out is key. Informative talks at schools or at special events will also grow your business for businesses that are out of the ordinary.

This article, “How to Start a Worm Farm” was first published on Small Business Trends